How to get started with chord voicings 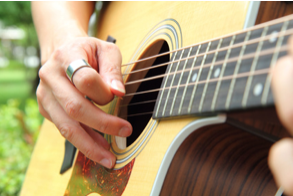 As guitarists we often learn chords as specific shapes or “ways to place our hands” on the guitar. This is all well and good in the beginning, where everything i

s about making it as easy to learn as possible, but at some point this way of thinkingcan actually hold you back in your musical development and progress on the guitar. The problem with this approach is, that you are not asking yourself any musical questions to develop you musicality such as “what makes a chord” or “why is this C chord a C chord”. Getting into chord voicings is a great way of solving this problem. It will also give you some great tools for making you music sound really professional and beautiful. This article gives you some great exercises for you to begin working on chord voicings.

What makes a chord?

This is an important question to answer, before we get into the actual exercises. A chord is made up of three notes. This means that there is a contradiction between the theory and the things we actually learn on the guitar. Think of a G chord for example. It is played on 6 strings, so why does the music theory tell us that it only consists of three notes? The reason for this is, that there often are some notes in a chord that are doubled. The note G in the G chord is played three times in different octaves for example. So to figure out what notes are in a chord use this method:

Now that you know how to figure out which notes go into which chords, your assignment is this: Choose ten different chords. The chords has to be all major. Using only the three highest strings on the guitar you have to find the three different voicing of each chord on these strings. This will be hard at first, but with a little practice it will get a lot easier. Doing this exercise will give you three different chords shapes depending on which string the root note is placed on. Once you have discovered these it will be very easy to use as you only have to find the root note of a given chord and place your fingers in the corresponding shape. Yo will find that you only need to remember 3 different shapes to be able to lay all the major chords in this way.

Assignment 2. This assignment is the same as above, but now you have to do it with the corresponding minor chords. Again you will discover three different chord shapes that corresponds to a particular root note placed on a particular string.

or chords or a mixture of both. But no extending chords right now. Then your assignment is to play this chord progression in three different places on the fretboard and in three different voicings using the three highest strings only. Always choose the chords that are closest to each other. For an example of this see the video below: 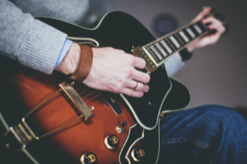 About the author: Janus Buch is the guitar teacher to seek out, if you are stuck in your current playing and fare serious about making progress and becoming the guitar player you were meant to be. The Guitar academy teaches players of all ages and skill levels. Even if you are totally new to the guitar, you would benefit greatly from beginner guitar lessons in Vejle